I have decided that it will be easier and more effective if I break my project in three parts where I can manage each one separately. Also for testing the project it would be much easier.

So I have three sections. The first is the tracing colour via the camera or cameras. This section will deal with the audience as a group. The idea here is to use their mobile phones as a source of light to be able to track them through the cameras in to Max/MSP. Another easy way to have light information form the audience is to give them a small colour LED with a small battery attached on. Also it will be visually interesting. 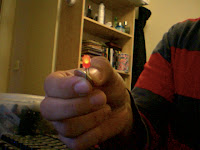 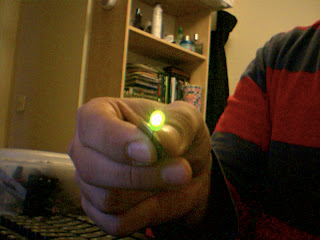 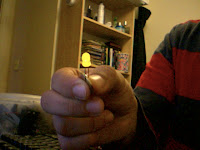 From there the audience will realise that their action is causing an effect on music. Another part of the audience as a group will be the use of Bluetooth to sent pictures. I am thinking to have a projector with the images that they send which will manipulate and affect the music.

The second is the data from the Wii remotes. I will have 4 Wii remotes that each one will be like an instrument. I have finished yesterday 8/11/2008 a few hand made infrared devices to use with the Wii infrared camera that is attached on the Wii remote. So far I am only forming my ideas on how it will work.

The third section is dealing with the live performers and the stage set up. I haven’t done anything for this section yet. I will form eventually along with the other sections.
Posted by Tychonas Michailidis at 13:48