This is an extract of the suggested performance mentioned in the essay. 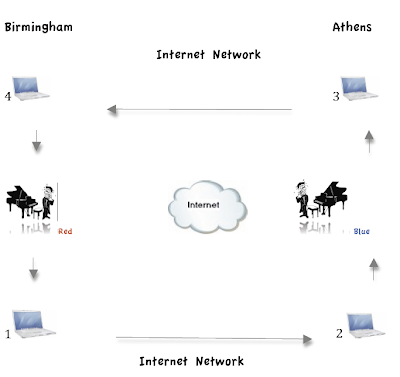 “Four laptops are placed in two different locations, Birmingham‐ Athens. Laptop 1 and 4 are based in Birmingham and laptop 2 and 3 in Athens. There is a performer between laptop 1 and 4 that is called Red and the performer in Athens is called Blue. Laptop 1 is connected via Internet network to laptop 2 as well as 3 to laptop 4 via Internet. Laptops 1 and 4 are not communicating together as well as the laptops in Athens. The piece is similar to Steve Reich’s phase musical approach. Instead of having the performer phasing the music in and out the network latency will phase the music in and out as natural effect. Two same instruments, pianos, are located in each location. Red and Blue will have the same score, 8 bars of music or 16 seconds of music at 120 (bpm). A clock will be needed to count the seconds and beats. There will be an ON/OFF situation between the two. When the Red is ON Blue is OFF and vice versa. The ON signal means that the performer will play the 8 bars of music. The OFF signal means the pause for 16 seconds. Red will start as ON by playing the 8 bars. As soon as Blue hears the first note from Red that is the signal to start as OFF, so counting the 16 seconds of rest before setting to ON. After this Red and Blue have to play on time and count with the watch in order to be as strict as possible. Laptop 1 is the input of sounds from Red and laptop 2 the output of Red and the input of Blue. Laptop 3 is the input of Blue and laptop 4 is the output of Blue and the input of Red. Anti‐clockwise circuited starting from laptop 1.The network latency in relation with the strict timing from Red and Blue will phase the music. A close set of headphone will be needed so that latent sounds and notes coming from laptops 2 and 4 cannot affect expectations and the performances of Red and Blue. The piece will stop when the two locations are in phase playing the 8 bars in unison. The outcome of the piece is based on the amount of latency that exists between the two locations.”

There are three stages in this experiment that need to be explored:
1. The design (hardware, software, place, instruments, score e.t.c)
2. The process (the way to put all this together and how they will work, interact with each other)
3. The outcome, the actual performance, what it is expected, the hypothesis of the experiment and the desired outcome.
I the third stage, the hypothesis and the assumption, is a good starting point since it has a major reflection on stage one and two.

The outcome of this experiment, as mentioned earlier, is to allow latency to phase in and out the music from two separate locations in order to experience similar music phases. A general outcome that the experiment will be based on is the following:

THE MAIN DIRECTION OF THE EXPERIMENT IS TO MAKE AVAILABLE ALL THE COMPONENTS SO THAT LATENCY IS EXPRESSED AS IT IS, SHOWING A CREATIVE PERSPECTIVE.

The debate between Greg and me in a small chat was whether
(a) this will work in the first place and if so,
(b) the 16 seconds of silence will become 32 as they will play along (Greg’s suggestion)or
(c) they will start towards unison direction from the very beginning (Tychonas suggestion)

There are also many other questions to be answered but let’s take some of them since more questions will appear during the process. There is an ON/OFF situation between the two locations. When Red is ON, Blue is OFF and vise versa. There will be latency within the two locations that will be added every time that Red or Blue is ON.
1. Is there added latency between the two locations and how much is it, how it can be measured?
2. How long it will take to have a noticeable effect?
3. How Red audience will listen in relation to Blue’s?
4. Is there a direction towards unison or a separation of the two leaving 32 seconds of silence and 32 seconds of music?
5. How to synchronize the two to know that there is a reference point to study the experiment.

The next step is to shape the design so that it is possible to know the equipment, place and time, instruments and performers.

Posted by Tychonas Michailidis at 10:14